Good Morning!
It is the morning of August 4, 2013.  We made it to Wales!
Annette was stressed trying to get all of her work done.  The internet went down so she was faxing information to her coworkers to cover her assignments for the next week.
I didn’t know how to make the best of our time to get sleep.  But I was tired so I napped on the way to the airport.
They put us in a TSA Pre-Check line for security.  That was nice.  You didn’t have to take off your belt or your shoes!  The laptops did not have to come out of the bags.  Much quicker!
The flight was uneventful.  I forgot my headphones in my camera bag that was in an overhead bin.  So I couldn’t watch a movie.  But that was probably for the best.  I was so bored that all there was to do was sleep.
The plane was so cold!  And the air was flowing right onto me.  I actually used that little blanket that the airlines provided!
Anyway, after dinner, I covered up and closed my eyes.  I know that I slept, but I don’t know how long.  But it helped.
When we got to London Heathrow, we must have walked for a mile!  First through the terminal, then to immigration and then to get our bags.
The car rental company asked if we had many bags.  We said no but that our bags were kinda big.  She gave us an Audi A4!  Very nice car with leather seats.  But too big!  The roads in the UK are very narrow, especially out in the country. 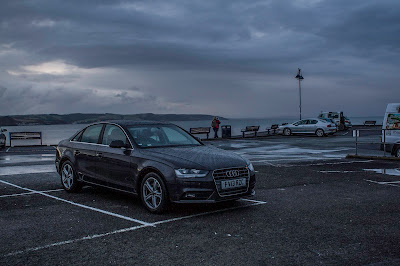 We have trouble when we rent cars in foreign countries.  We can’t figure out how to get them started.  It happened to us in Germany and it happened to us here.
The Audi has a key fob that you insert into a hole in the dash.  But it doesn’t turn.  I pushed it in further, but nothing happened.  I had to go back and ask one of the rental guys.  It seems that you have to put your foot on the brake when you are pushing the key in!  You also have to put your foot on the brake and push the key again to turn the car off.
Then when I was in line waiting to pull out of the rental lot, the car shut off!  Now what!?!?!?  It seems that to save fuel or to reduce emissions the car automatically turns off when you come to a stop for several seconds.  Then when you let off the brake the car automatically starts!  It worked well, but what will it work like when the car has over 100,000 miles on it?
No problems driving on the left on the highway.  I figured that out OK.
Roundabouts are where you have to pay attention.  The good thing is that they have the routes painted in the lane where you need to be.
They had a couple of roundabouts on the highway!  That was strange.  It backed up two lanes of traffic for 2-3 miles!  I thought roundabouts were for intersections not interchanges!  I guess I was wrong!
We took a nap at a service plaza.  When we woke up we found that there was a local, grass strip, airport right in front of where we parked!  To top that off, there was a yellow bi-plane flying with a guy sitting up on top of the top wing!  They were flying back and forth in front of the service plaza!  Annette got out her camera and long lens and started snapping as fast as she could!
When we got to Saundersfoot, Wales, we turned left when we should have turned right.  We followed a country lane that was fascinating!  It seems that they cut down into the ground to make the road.  That meant that there was a six foot high border to the road on both sides and the road was barely wide enough for two cars!  Driving on the left side of the narrow windy road, watching for oncoming cars was very stressful!  We almost wished they had given us a smaller car.  Almost.
We asked for directions and found our way to the Cwmwennol Country House.  No, that is not misspelled.  We checked in, which consisted of a brief conversation with the owner.  We didn’t sign anything.  She didn’t check for ID.  She just handed the key to us.  Just pay on the way out, she said.
The place is old, like everything in Wales.  The room is small.  The bathroom is very small.  And the shower is very, very small.  It’s so small, you have to go out side to change your mind!
We went back to Saundersfoot and pulled in to the parking lot.  Wow are the spaces small!  I had trouble pulling into a parking space so Annette got out and helped to direct me.  An Englishman, who was there on holiday, came over to help.  He was very friendly.  I think he just wanted to hear us talk!  He told us how to pay for parking.  He actually gave us a pound (that’s money, you know) because we were a pound short!
We ate at a fish and chips place and sat outside.  The fish was very good.  Annette remarked on it.
We wandered around downtown Saundersfoot.  Then the lighting changed and we got out our cameras.  Then we spent the next two hours photographing the boats and the harbor.  I thought the tide was out because a couple of the boats were sitting on the ground.  But the longer we were there, the more boats sat on the ground.  Some of them sat on two keels and the rudder for a triangular base. 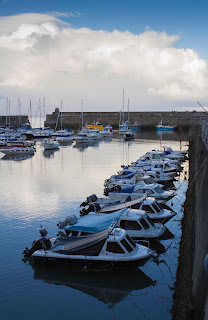 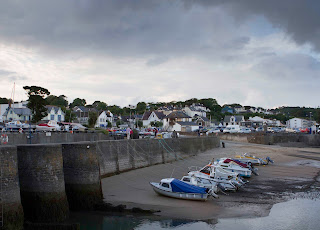 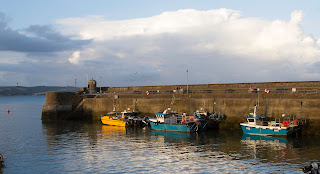 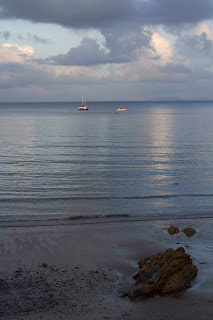 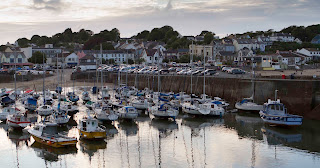 I started a new photography project.  I started taking pictures of the car manufacturers’ emblems.  Then I added the license plates.
While we were walking around a lady came up to me and asked why I was taking pictures of license plates.  I told here that we were from Pennsylvania and that there were a lot of cars here that we did not have at home and also the license plates were also different.  She accepted that but you never know how people think about their privacy.
Annette met another couple and started talking to them.  They were also here on holiday.  They gave us a lot of information, the most interesting of which was 1. Pembroke castle is the best and 2. St. David’s Cathedral was beautiful.  So we have added them to our list of destinations.
We came back to the room.  I slept like a baby!
We got up at 5:30.  There was light in the sky, so we hurried back to the harbor with our cameras.  Unfortunately, the sunrise was a bust.  Too may clouds.  We took pictures of the boats until it started to rain.
Now, we are waiting for 8:30 to come so that we can go down for breakfast (8:30 to 9:30).
Hope you enjoyed this.  Let me know if you have any questions.