Hello, again!
It’s day two in Wales.
At the end of my last blog, we were waiting to go down to Breakfast.   It was hearty.  Their bacon was like a slice of ham with some fat left on.  I had yogurt with Muesli and nuts that I mixed in.
After breakfast, we drove to Pembroke to see the Pembroke Castle.  It was great.  It was exactly what we were looking for.  It was largely intact so that we could wander around looking for great shots.  Yet, there were displays that help you understand what it was like to live back a thousand years ago.
I felt conspicuous with my camera.  Normal people don’t walk around with something that heavy around their necks!
I had one guy ask me  how to get up in one of the towers.  When he heard me speak, he asked me where I was from.  I told him Pennsylvania.  He asked where in the US was PA.  He said he gets it mixed up with Transylvania!  I told him we live four hours from NYC.  That he understood.
But that’s nothing! Annette was her normal, cheerful, friendly self.  She estimates that she talked to 15 people today (besides me and my friend, Sybil).  She got some awesome pictures of one of the re-enactors eating a meal of bread, cheese and apples.  He was in front of a window and there was beautiful light!  The basket and wooden plate pictured here were in the same room as Annette’s “studio”. 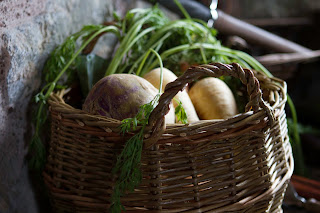 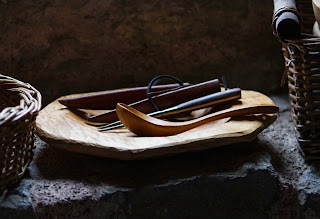 We were at the castle from about noon until six.  Annette could have stayed longer, but the place was closing down and she wanted to check out the gift shop.  We got a magnet for our collection. 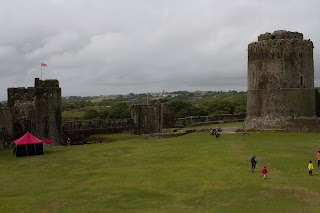 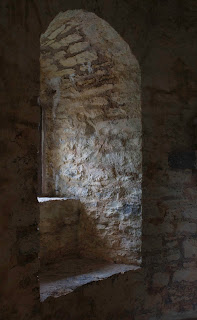 Then we wandered up through town.  We went in to the King’s Arms Hotel to see about dinner.  That was a treat.  We were seated in the Pub and there was a group of 5-6 guys and one woman who were well on their way.  They were occasionally loud.  Oh, Well.
Since we were not in the restaurant portion of the establishment, service was slow.
At the end of the meal, some of the other patrons started talking to us.  One woman was from Canada and had married a Welshman.
One woman was from London and had married a Welsh man, but they were divorced.  She was there with their two kids.  She taught English as a second language to refuges.  Could be interesting.  Should definitely be rewarding
On the way home, the GPS said to keep right on Whatever Street.  I almost kept right into the front of another car!  AAAAh!
We drove through Tenby on the way home.  Very pretty.  Right on the shore.  But kind of touristy.  We decided not to back to Tenby the next day.
We drove through another one lane road today!  That keeps you on your toes!
Actually, driving on the left is a good way to keep your mind active.   You really need to think about every turn.  And roundabouts!  Oh, man!
We’ll “talk” again soon!